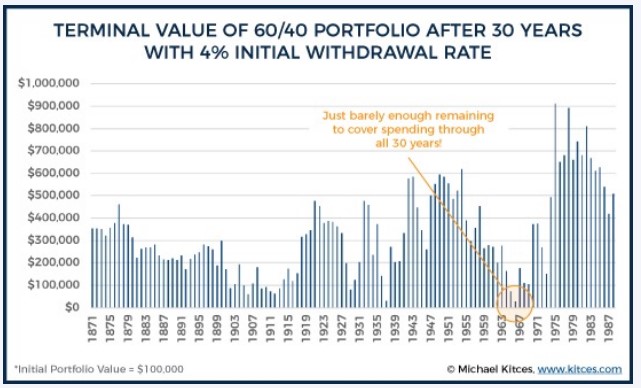 The two Charts of the Day are from Michael Kitces and show the value of a $100,000 portfolio of 60% stocks and 40% bonds after 30 years with a 4% and 5% initial withdrawal rate. These comments come from Rich Emch, CFP®, Trust Administration Officer.

The chart above displays the 4% withdrawal rate that has become standard over time. It is based on a study that showed that over all of the 30 year time periods dating back to 1871, you could withdrawal an annual amount equal to 4% of your initial portfolio, adjust each year for inflation, and not run out of money. (Terminal Value = Safety Margin Dollars at the end)

However, a 1% increase in the initial withdrawal rate to 5% makes a big difference. Below is the same study that starts with 5% in the initial year and the same inflation adjustments. The bars in the red are the 28 times that it ended below zero. 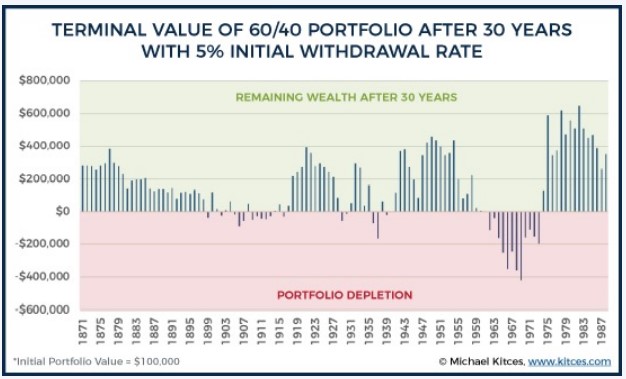 The other big issue is the huge disparity in the amount of money left over at the end of retirement depending on which 30 year time period you are referencing. As you can see in the chart above, in many of those 30 year time frames, even at a 5% starting point, you may end up with significantly more than you started with. This leaves a lot of money on the table that you could have enjoyed.

One solution is to put in additional guardrails or rules that allow for spending increases and decreases based on annual market performance. An even better approach is to combine these guardrail adjustments with probability results into a distribution frame work. For example, you may set an initial withdrawal rate of 5% that also provides a 90% probability of a successful retirement (i.e.. not running out of money). Then during retirement, you would plan to make adjustments downward in spending if the annual probability falls to 80% as an example or plan to increase spending when the updated probability forecast is over 95%, for example. 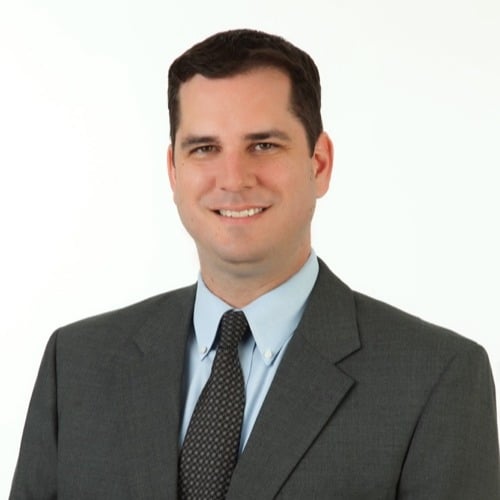 Samuel serves as Senior Vice President, Chief Investment Officer for the Crews family of banks. He manages the individual investment holdings of his clients, including individuals, families, foundations, and institutions throughout the State of Florida. Samuel has been involved in banking since 1996 and has more than 20 years experience working in wealth management.

Investments are not a deposit or other obligation of, or guaranteed by, the bank, are not FDIC insured, not insured by any federal government agency, and are subject to investment risks, including possible loss of principal.

The Crews family of banks has been here for you for over 90 years...and generations to come.

“I feel like my relationship with Wauchula State Bank is a friendship, and I am incredibly loyal to the bank because they have [not only] supported me, but also provided what I feel is the best service.”
Lauren Canary
Watch the Full Video
“I was able to develop a relationship with Charlotte State Bank [& Trust] very quickly, which is something you don’t experience often, especially in a bank. It feels like family. It really does.”
Ken Smith
Watch the Full Video
“Wauchula State Bank made it very easy to do an equity line of credit. I need someone like Mark Delany in my corner ... he made the whole process as enjoyable and flexible as it could be.”
Paul Schulz
Watch the Full Video
“[Charlotte State Bank & Trust takes] care of clients as though they are family members. I think their strength ... is their people. They truly care, they're knowledgeable, and they make you feel like family.”
The Hayman Family
Watch the Full Video

Subscribe to our blog for a weekly roundup of our latest financial blogs and resources.